Bennett Makes it Two in a Row at Stafford Motor Speedway

n the 40-lap SK Modified® feature event, Mikey Flynn led the field to the green but Michael Christopher, Jr. took the lead on the first lap before the caution came out for a multi car incident in turn 2 with 1 lap complete.

Christopher took the lead on the restart with Flynn in second and Todd Owen in third. Owen worked his way by Flynn on lap-5 to take over second with Bryan Narducci in fourth and Tyler Hines and Chase Dowling side by side for fifth with Keith Rocco in seventh. The caution flag flew with 9 laps complete for Doug Meservey, Jr. who did a half spin through the frontstretch infield.

Owen took a look to the high and low side of Christopher on the restart but Christopher was able to maintain the lead. Rocco came up to third with Hines side by side with Flynn for fourth. Hines took the place on lap-12 while Stephen Kopcik took fifth on lap-13. Up front, Rocco got around Owen to take over second and he began to set his sights on Christopher for the lead.

At the halfway point of the race, Christopher still held the lead with Rocco right on his bumper. Owen was third followed by Hines and Kopcik. Noah Korner was up to sixth followed by David Arute, Ronnie Williams, Andrew Molleur, Dowling, and Tyler Leary.

Hines got around Owen for third place on lap-31 while Rocco was still giving chase to Christopher for the race lead and Kopcik was still running in fifth place.

Rocco couldn’t get close enough to Christopher to make a move for the lead as Christopher took down the victory. Hines finished third with Owen and Kopcik rounding out the top-5. 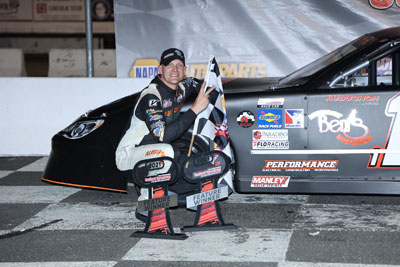 In the 30-lap Late Model feature, Rick Lanagan took the early lea with Paul Varricchio, Jr. in second. Jim Mavlouganes was third in line followed by John Blake and Darrell Keane. Keane drifted up the track on lap-4 and slid back several spots to eighth place. Adam Gray got around Blake on lap-7 to move into fifth place while Michael Bennett took third from Mavlouganes on lap-8. Gray was right behind Bennett and he also got by Mavlouganes to take fourh as Lanagan and Varricchio continued to hold down the top-2 spots. Mike O’Sullivan spun in the middle of turns 3+4 to bring the caution out with 10 laps complete. Michael Wray was black flagged to the rear of the field for making contact with O’Sullivan.

The field completed one lap before the caution came back out with 11 laps complete for a spin in turn 2 by Andrew Durand. Bennett charged by Lanagan on the restart to take the lead while behind the lead duo was some 3-wide racing with Gray charging his way into third. Mavlouganes settled into fourth with Blake rounding out the top-5. Ryan Fearn was on a charge as he took fifth place from Blake on lap-17 while Bennett was starting to stretch out his lead over Lanagan and Gray.

Gray got by Lanagan on lap-20 to take over second place but he had a gap of nearly 2 seconds to erase in order to get close to Bennett. That margin was erased with 21 laps complete for Al Saunders, who got into the turn 2 wall and was showering sparks from his car as he slowly brought his car to pit road.

After a restart was called back Bennett took the lead with Gray immediately falling into line in second. Ryan Fearn took third as Lanagan fell back to fourth with Mavlouganes in fifth. With 5 laps to go Bennett and Gray had pulled away from Ryan Fearn in third. Mavlouganes and Lanagan touched as Mavlouganes was going for fourth place and he spun to bring the caution out with 25 laps complete. Mavlouganes was black flagged to the rear of the field for making contact with Lanagan.

Bennett took the lead on the restart while Ryan Fearn took second from Gray. Wayne Coury, Jr. took third from Gray but Gray came back with a crossover move on lap-27 to get back into third place. Tom Fearn was fifth in line with the side by side duo of Michael Wray and Keane behind him. Marc Curtis spun in the middle of turns 1+2 to bring the caution out with 27 laps complete to set up a 3 lap sprint to the finish.

Bennett took the lead on the restart with Ryan Fearn moving into second. Gray was third with Coury in fourth. Coury slid up the track on lap-28 and fell back several spots but the caution came out as Mavlouganes, Zack Robinson, and Cliff Saunders all spun in turn 3. Under the caution Tom Fearn brought his car to pit road where it was found to be leaking fluid and his race came to an early end.

Bennett took the lead on the green white checkered restart with Gray all over his back bumper. Bennett was able to hold off Gray and Ryan Fearn to take down his second consecutive win to kick off the 2021 season. Coury finished fourth with Keane rounding out the top-5. 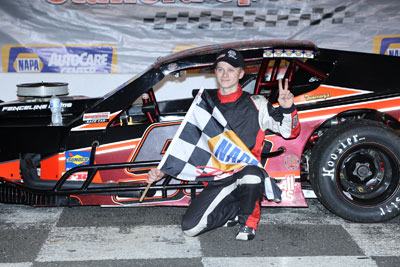 In the 20-lap SK Light feature event, Tyler Chapman took the lead at the green with Todd Douillard nearly making a move for the lead but slotting back into second. Chris Matthews was third in line but he took second from Douillard on lap-2. Peter Bennett was fourth followed by Brian Sullivan and Bob Charland side by side for fifth.

Matthews pulled alongside Chapman on lap-4 and he took the lead on lap-5. Sullivan and Douillard were now side by side for third behind Matthews and Chapman with Derek Debbis already up to fifth. Debbis took fourth from Douillard on lap-7 and he was looking to take third when Chapman spun coming out of turn 4 to bring the caution out with 7 laps complete.

Matthews took the lead back under green with Debbis moving into second. Sullivan was third in line with George Bessette, Jr. up to fourth and Alexander Pearl up to fifth. Debbis took the lead from Matthews on lap-10 and the caution came out with 10 laps complete for Sami Anderson, who spun in turn 2.

Debbis took the lead on the restart with Matthews right behind him in second. Sullivan was third with Pearl taking fourth from Bessette on lap-14. The caution and red flags flew with 16 laps complete as Douillard hit the turn 4 wall head on and Sami Anderson also hit the turn 4 wall trying to avoid Douillard’s car.

After a delay to repair the turn 4 wall, the race went back to green with Debbis leading Matthews, Sullivan, Pearl, and the side by side duo of Bessette and Steven Chapman. Bessette got clear from Chapman on lap-18 while Debbis picked up his second consecutive win of the 2021 season. Sullivan finished third with Pearl and Bessette rounding out the top-5. 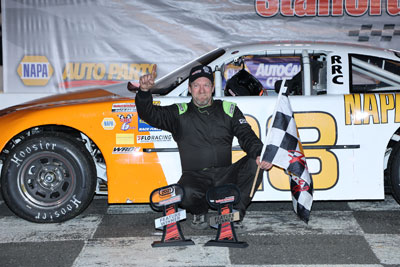 In the 20-lap Limited Late Model feature event, Matt Clement took the lead at the drop of the green but he dropped off the pace going down the backstretch on the first lap which put Jeremy Lavoie into the race lead. Mike Hopkins was second in the early going followed by R.J. Surdell, Rich Hammann, and Alexandra Fearn. Hammann made a move to get by Surdell on lap-3 and that move opened the door for Fearn to follow Hamman by Surdell and drop him back to fifth in line as Lavoie continued to lead the race.

Hammann was slowly reeling Lavoie in and with 7 laps to go there Lavoie’s lead was less than a car length over Hammann. Jay Clement got around Surdell on lap-14 to move into fifth while Hammann made a move to the inside of Lavoie on lap-16 but Lavoie was able to fend off the challenge. With Hammann and Lavoie dueling for the lead, Fearn was closing in on the two lead cars and with 3 laps to go it was a 3 car train for the lead.

Hammann made his move for the lead on lap-18 and his pass opened the door for Fearn to follow him through and drop Lavoie from the lead back to third place. Hammann held Fearn off to the checkered flag to pick up his first career victory at Stafford. Lavoie finished third with Hopkins and Clement rounding out the top-5. 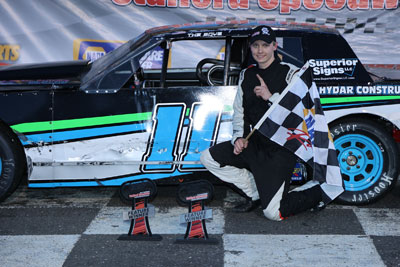 In the 20-lap Street Stock feature event, Sam Calvo spun into the frontstretch wall at the drop of the green flag to bring out the caution flag. The next restart saw Bert Ouellette take the lead at the green and he held off a challenge from Adrien Paradis, III on the first lap to maintain the race lead. Travis Hydar quickly moved into third with Kyle Johnson fourth and Nickolas Hovey fifth before the caution came back out with 1 lap complete for a spin by Christopher Phelps.

Ouellette resumed his place at the front of the field on the restart with Hydar getting around Paradis to move into second. Johnson was fourth in line with Hovey in fifth. Ouellette’s race came to a premature end as his car dropped off the pace as he completed lap 4 and he limped back to pit road. This put Hydar into the lead followed by Paradis, Hovey, Johnson, and Chris Meyer. Phelps spun in turn 2 to bring the caution back out with 4 laps complete.

Hydar powered his way into the lead back under green with Hovey moving up to second. Meyer moved from fifth to third as Paradis fell from second back to fourth with Johnson in fifth place. Johnson spun in the middle of turns 1+2 to bring the yellow flag back out with 7 laps complete.

Hovey was able to stay on the outside of Hydar for the lead for almost a full lap before falling back into third place behind Hydar and Meyer. Frank L’Etoile, Jr. was up to fourth and Paradis was fifth in line when the caution came back out with 9 laps complete for a spin by Phelps.

Hydar took the lead back under green with L’Etoile taking second. Hovey was third but he went by L’Etoile on lap-12 to move into second and Hovey would fall back to fourth on lap-13 as Meyer took over third place. Chris Danielczuk and Calvo got together in turn 1 on lap-14 but both cars were able to continue on and the race stayed green.

With 5 laps to go, Hydar was starting to slowly edge away from L’Etoile in second with Meyer, Hovey, and Jason Finkbein making up the top-5. Hydar had stretched out his lead to nearly one second but the caution flew with 19 laps complete for a spin in turn 2 by Jeremy Washburn to set up a green white checkered finish.

L’Etoile went side by side with Hydar for the first lap of the green white checkered finish before slotting back into second. L’Etoile made one more run on the final lap but couldn’t get close enough to Hydar to make a move as Hydar took down the victory. Hovey finished third with Meyer and Finkbein rounding out the top-5.